Running in the heat isn’t fun.  I have found this out by experience this year.  Last Summer I was running 2 miles a day at 11:00 pace and it wasn’t as big of a deal. This year I am running 7 miles at 9:00 pace and it became a big deal.

I say this to say that yesterday I ran in what is, compared to last week, cooler weather.  it was 82 degrees with a heat index of 85.  It felt hot, especially as the heat came up from the street.

Notice the images below.  One is from June 5th when the heat began to kick in.  The other is from yesterday.  Both runs were around the same time of day and exact same temperature. 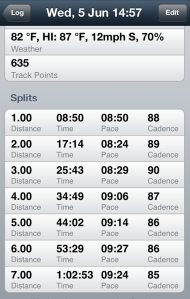 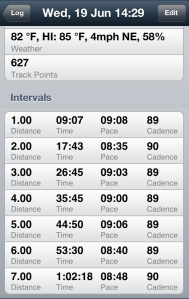 I remember the June 5th run.  It was hot and I was running with TJ over a newer area we had just started running.  I felt good in the beginning but by the end I didn’t think I could continue.  My legs felt like lead and I was thinking, “What is wrong with me”.

Yesterday I didn’t feel perfect, but it felt good.  I ran faster at the end of my run than at the beginning.  I was tired when I was done, but not exhausted.  Both runs finished in almost the exact same time, but the run yesterday was much better at the end.

What was the difference?

I read somewhere that it takes 2 weeks to get used to the heat while running.  Your body has to get used to using all that energy (that produces heat) and also cool itself down at the same time.  So I think that considering yesterday was 10 degrees cooler than our runs last week and it has been a couple weeks of warm weather really helped.  Also I ran for the first time in my new Columbia running shirt that is made of material that cools when it gets wet.  So as I sweated, the shirt actually cooled me.  It didn’t cool a huge amount in the sun, but one time I was in the shade and a breeze blew and I actually felt a little cold!  Crazy.  These shirts cost $50 at Dick’s Sporting Goods so it will take some time to purchase more, but this one was a gift for Father’s Day from TJ and it really helped.

Today, I hope to run with Neill (@BigBigGeek) around the lake again.  If all works out and we can run, it will be a lot of fun and a nice change to my daily routine.