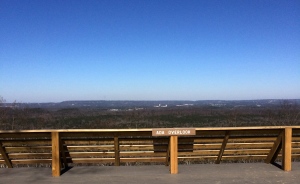 Top of the mountain

We ran… Up and up and up.  Where was this road going?

TJ and I decided to run at the state park.  We took a beginning route like @bigbiggeek and I ran the day before.  But as we got to the end of the road, we decided to take the narrow “road” to the left rather than turn around.

It was nice.  Running in the shadow of a mountain up and down and around.

But then the downs went away and it was just up.  We ran up one hill that immediately turned into another hill and then up another.  It went around curves and then continued upward.  I looked to my right and the small drop off became a steep fall.

We reached about 2.5 miles of running and so far this one “hill” was 1 mile long.  I had to stop and take a breath.  Then back to running up the hill.  1 mile up became 1.5 miles and then 2 miles.  I had never run up hill for two miles straight.  It became obvious that we weren’t running in the shadow of the mountain, we were running UP the mountain.

Finally the ups became more flat.  We were at 3.5 miles out and I wanted to get to 4 miles so that I would have an 8 mile day.

The picture above was one taken at the top.  We still had to run about a 10th of a mile to get in 4, so we continued on and then turned around to head back. 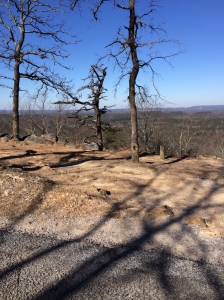 As we began to head back, I saw these cool trees overlooking Birmingham.  What a great view. 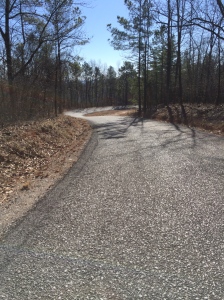 Heading back down the mountain

Finally we began our decent.  On our way up we saw no one.  No cars, no bikes and no runners.  On our way down we saw several cars going up and a few bikers heading up the mountain.  We flew down the road and around all the curves and to the bottom of the mountain in record time.  My legs felt like mile 20 of my marathon.  Shot.

We finally ended at the bottom of the mountain and got back on the road that would lead us to our car.  I hadn’t realized how many hills we ran down in the beginning of our journey.  So we had a mile and a half to go and it seem to be mostly uphill!  I told TJ, my legs were shot.  But then I thought of my marathon and that I needed to make my legs run, even with nothing left.  So we pushed on.  In fact that last mile we ran near my marathon pace. 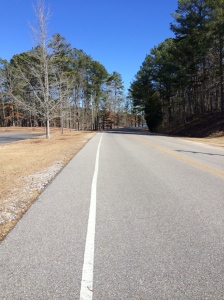 Back to the main road

Finally back to civilization.  TJ told me that we had just .5 miles to go.  I was never so happy to see the road and the park.

So I had a couple of unexpected firsts in the run yesterday with TJ.  First we ran up a mountain which I never thought I would do, but it was an amazing experience.  What a feeling of accomplishment for me to look out over the city while realizing I just ran 2 miles up hill.  Second, I got in 8 miles which is the most since my marathon last fall.  My hip wasn’t perfect, but it made it through and I feel fine today.

So the rest of the day was filled with football and burgers.

What a great day for a run.

2 thoughts on “Running up a mountain”