Let’s get that out of the way first.  Drum roll please…

My official time was…

Honestly, I wouldn’t have made it without TJ pacing me.  The last 1.5 miles were mostly up hill.  That, after a lot of hills in the first 8 miles and trying to keep below an 8:00 pace… Which I did for all but the first mile.

Here is the graph and the splits: 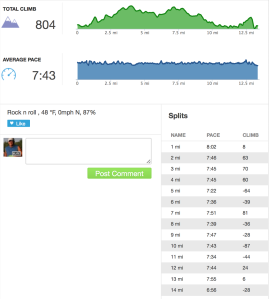 On to my recap

Philosophically, I view racing as similar to childbirth (please don’t get offended with me ladies).  The fact is – it hurts while you are in progress, but after it is over, you can barely remember the pain.

It was a beautiful morning.  We got to our reserved parking area in pretty good timing.  We met @BigBigGeek and @David_Topping and talked for a bit.  Then to the porta-potties for an hour wait – that was crazy.  TJ and I rushed off to coral #3 and left RS and the others to finish their business.  By the time we got done with the port-potties, it was just 10 minutes until race time.

We in just a few minutes the corals began moving. When we got to the starting line, somehow we were in coral #4 rather then #3.  I don’t know how that happened, but the 3:30 marathon pacer was also in our coral, which ended up being a very good thing.

I have never run a race with 20,000 people in it.  Actually I think the half marathon had 20,000; I’m not sure about the total with the marathoners.

We heard the horn and began our run.  It was tight.  It was hard to run freely for at least a few miles.  The first mile was our slowest at  just over an 8:00 mile (which really wasn’t bad).  That was mainly due to congestion.  Shortly after mile one, we ended back running past the corals with people standing and waiting to run.  I guess there were near 30 corals.  I thought of RS who was around coral 22.  We were 30 minutes into running before he even began.

TJ helped me make an unofficial goal to keep the 3:30 marathon pacer in sight as we never saw the 1:45 half pacer after the start.  This was hard for the first 3 or 4 miles.  He would get a bit ahead and we would slowly catch up.  The crowds were just too deep to get around.  I would see an open area and do a quick sprint to get ahead (the one thing TJ said was a mistake after it was done – he said we should have saved that energy and been patient to get around people… good point).

Finally after several miles we caught up with the pacer.  We hung with him until mile 10 or so.  This was huge for me.  Let me digress a bit and say the hills on this route were crazy.  The first 8 miles or so seemed to be one hill after another.  I could feel my mountain runs kicking in after a while.  I have done quite a few mountain runs in the past few months, but never at an 8:00 pace.  Though when I was running this race and I was getting tired, my legs seemed to keep their strength.  I needed that!  As we went up and up and up and up, my legs were good.  I was tired, breathing hard and wondering why I was doing this at times, but my legs kept me going.

Mile 3 TJ gave me my first GU. Mile 7 I had my second and mile 11, the course provided one.  Perfect.  Each time I was fading a bit, the GU kept me going.  I was so glad for them.

Finally the day got warm.  It started in the 50’s, but by mile 8 or so, it was warming up a bit too much.  This is where I first hit a small wall.  I was thinking, “I don’t know that I’ll make it the next 5 miles”.   This was when I had a neat experience.  Generally I tune out during a race.  I honestly didn’t notice much.  I just concentrate on running the race.  At this small wall experience, I ran past a person holding a sign that said, “The joy of the Lord is your strength”.  I prayed, “Lord, that is true, so please give me some strength”.  A moment later we ran past a large church with a praise band playing “Mighty to Save” by Hillsong.  I love that song and after a moment listening to it as we went by, I felt rejuvenated and had run past the wall.  Pretty cool.

Finally at mile 9 TJ said it looked like the marathon was splitting between the full and the half.  I panicked.  I had kept a perfect pace with the 3:30 pacer for 9 miles and I wasn’t ready to go it without his lead.  Fortunately I didn’t have to.  We didn’t split.  We kept following him.  Then a good thing happened.  At mile 10, we somehow got ahead of the pacer.  I looked around because I didn’t see him and he was behind us.  We never saw him again.  We just kept with our pace and at mile 11 the route split and I was fine.  Very cool.

Finally the last two miles.  I can do this.  Little did I know that they would be mostly up hill.  Seriously?  I just ran up and down tons of hills, and now, after keeping below an 8 minute pace for 11 miles I am going to have to finish with nearly 2 miles of hills.

At mile 12.5 I told TJ that I couldn’t continue.  I felt like it was too much.  He encouraged me saying we only have a little left to go and to try to keep my pace up so I’d beat my 1:44:11 PR.  Honestly, I don’t know how I did, but I did.  Without TJ there, I would have slowed down.  I doubt I would have walked, but I know I would have not kept up my pace.

We finally began going down a hill.  A runner who had finished was walking up the hill we were running down and saying, “It’s all down hill from here”.  I pushed as hard as I could.  A couple guys ran hard past us at the very end and TJ took off and passed them with just a few hundred of feet to go.  I had nothing left.  I just put everything in my body to get to the finish.  Everything.

You (for reading this far)

Thank you all.  It was well a done race.  I hated the hills, but my mountain prepared me for them.  Once again, without TJ I would not have come close to the time I had.  Thank you TJ.  Thank you to my family for letting me spend a weekend away to run this race.  Thank you to everyone who liked my “results” post.  Blogging makes running so much more fun. 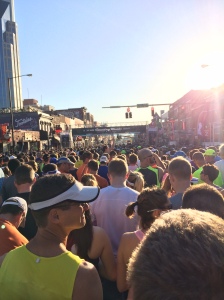 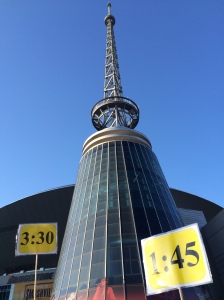 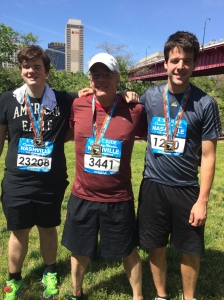 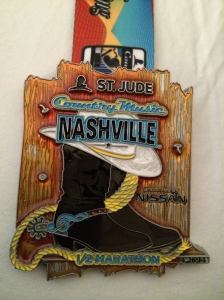 24 thoughts on “Country Music Half Marathon – PR and Recap!”