It was a great race…

The Shake and Bake 5K ended up being fun, lots of PRs and a family pizza!!!

So, we got to the 5K about an hour early. Perhaps it was a bit too early, but I already had my beet root juice; TJ, RS and I eat breakfast and we were ready to get to the race. Thus we got there an hour early. We ran a mile and then met Neill (@BigBigGeek) near the starting line.

So what do you do when you have run a mile, used the porta potty, and meet your friend who is going to run the same race… You run another mile. That is what we did.

As we started running another warmup mile, I noticed this sign on the route:

We finished our run and lined up on the starting line. A prayer… and the race began.

I stated out too fast. I was a half mile into the race and I could still see TJ. I knew I was running too fast, so I slowed down. Perhaps it was too late. I was only a mile into the race and I was breathing way too hard. A few up hills and a few down hills and I was back on my game. Then 2 missed turns. Fortunately I was able to correct my errors pretty quickly, but I lost precious time. The first turn that I missed, I noticed a runner retracing his route and figured that something was wrong. I corrected fairly quickly. The second, I was going the wrong way and another runner behind me called out (thank you, I don’t know who you are) and I corrected, but I lost time and he moved in front.

Okay this isn’t the Olympics, but I take my 5K seriously… Perhaps I shouldn’t.

From this point on I ran the course correctly. I got to a T intersection and I had to turn left and I saw TJ running to the right – right in front of me – He was smoking.

I came up on the finish line and TJ was cheering me on and I noticed the clock… I finished 4 seconds slower than my last 5K and 20 seconds below my PR. Those dreaded missed turns. Oh well. What could I do.

I ran a final cool down mile with TJ. Perhaps the most fun mile of the race (post race). We ran and we recounted the race and had fun. We got back in time to see RS sitting alone and resting. He had finished 2:00 faster than our last race and had only gotten 4 hours sleep because of work. Wow. We all did amazing things in this race.

Finally the awards. First, our family award… Yes, family award. I had never seen one before, but our family one one of two awards and got a $50 certificate to a local pizza place. Now that is my kind of award. From then on they only gave awards for the first place finish. TJ, who came in second in his age group at 18:48 didn’t get to hear his name. Such a shame as he ran a FANTASTIC race. RS came in third in his age group at 26:23 (1 second behind 2nd place) didn’t get to hear his name. [editorial: I think there should be recognition for the 3 top age group winners – just my opinion]. Finally the 50 and up group… Yes my age group. I feel so old sometimes as I just turned 50… okay 9 months ago. I won my age group. Wow, my time of 22:08 won the 50 and up (really sad when there is no upper age limit) age group.

It was a hard race. There were a lot of up hills and at some points I wanted to just walk, but something TJ said to RS at our half marathon kept playing in my head… “you can jog, but don’t walk”. I just kept going.

So maybe that is the moral to the story… When things get tough, “Just keep going”. Also TJ always says, “Never make a decision on a hill”. Both sayings have wisdom in life.

So it was a great day. My friend Neill also got a fantastic PR by beating his best race by almost a minute. Way to go Neill.

Now for the pictures – Thanks for reading.

RS, TJ and Me – Yes I am shorter than all my sons! 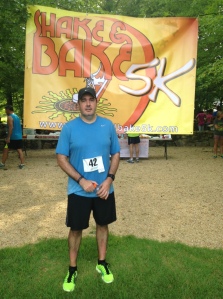 Link to my blog’s feed